The Joy of Volunteering with Grandchildren 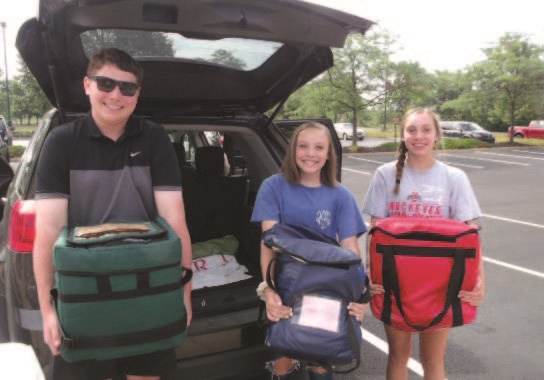 At 11 years old, Eli Bonner is a veteran Meals on Wheels volunteer. The meal recipients on his route like to talk to him about school and his baseball team. He especially enjoys the clients who give him “hugs and candy.”

When asked what keeps him coming back, Eli points to the man sitting next to him, his grandfather, Ed Kramer. Ed started bringing Eli along on his weekly meal route four years ago. He enjoys the one-on-one time with his grandson. “Gives us more things to talk about and I like the way people respond to him,” Ed said. “It makes their day a little better.” 15-year-old Ethan Johnston has accumulated more than 100 hours of Meals on Wheels volunteer time, gained during summer and holiday breaks between the third and tenth grades. He set the example for Karen and Eldon Johnston’s eight other grandchildren when he started assisting with their meal route. “We’ve had all the grandkids on the route at some point.” Karen said.

“It’s nice to know that you’re making someone’s day by bringing their food and bettering the world one meal at a time.”

Ethan’s cousins, Lily and Maddy Thompson, are also enthusiastic about volunteering with their grandparents. “A benefit of doing Meals on Wheels is that you get the opportunity to help people in need.” Lily said. “It’s nice to know that you’re making someone’s day by bringing their food and bettering the world one meal at a time.”

Maddy agrees with her older sister. “Instead of being lazy, it gets you out of your house to do something for other people,” she said. “Plus, there’s more bonding time with your grandparents and you get closer.”

The results of a 2014 national survey conducted by Harvard University were published in a report called, “The Children We Mean to Raise.” The survey questioned kids about their priorities and found that most respondents, across a wide spectrum of races, cultures, and classes reported that they value aspects of personal success—achievement and happiness—over caring for others.

The report emphasizes the need for adult role models who exhibit caring behavior. “You have to lead by example,” said Karen. “You can’t just tell them to be good people and do good things.”
Doing good is a learned behavior, according to the report. The more children practice good works, the more they gain exposure to different spectrums of society, which helps them to develop empathy. Seventh grader Maddy says delivering meals “makes you interact more with people who aren’t your age and gives you a different social experience.”

“I’ve had a lot of exposure to age-related challenges. And I’ve seen the diversity in the community.”

Parents’ desire for their children’s happiness can lead to shielding them from adverse experiences that, the report says, “can rob kids of coping skills that are vital for their short and long term well-being.” Ethan ticked off some of the situations he has encountered while delivering meals, from experiencing the loss of a favorite client who passed away to empathizing with a client who suffers from Alzheimer’s disease. He remembers the first time he saw an oxygen tank and delivering his first pureed meal. “I’ve had a lot of exposure to age-related challenges. And I’ve seen the diversity in the community.”

Homebound seniors don’t always have opportunities to interact with children and their presence is often a treat. A client on Eli’s meal route bestows him with a new joke each week. One of the clients on Johnston’s route likes to walk around the apartment building with the family as they deliver meals in order to chat with the kids. It is a win-win situation,” Maddy said. “It helps you learn to interact and talk to adults smoothly.”

Another benefit for Ethan is that when he became old enough to apply for National Honor Society he had no problem coming up with the required 50 hours of community service and letter of reference. Still, he says, “I wouldn’t be delivering meals if I didn’t enjoy it. I could find another way to get my hours.” Lily’s meal delivery time fulfills a community service requirement for her confirmation class. For Maddy, “I don’t need hours yet, I just think it’s fun to go.”

The best part of delivering meals as a grandparent-grandchild team is the time spent together. Karen and Eldon extend their bonding time by treating the grandchildren who helped on that day’s meal route to lunch afterward. “They get to choose where we go,” said Karen. The kids learn that summer and holiday breaks are about both having fun and giving back. When grandparents are involved, the two experiences intertwine.

Jill Smith the recruiter for volunteer services at SourcePoint. This story was also published in the Fall 2019 issue of My Communicator