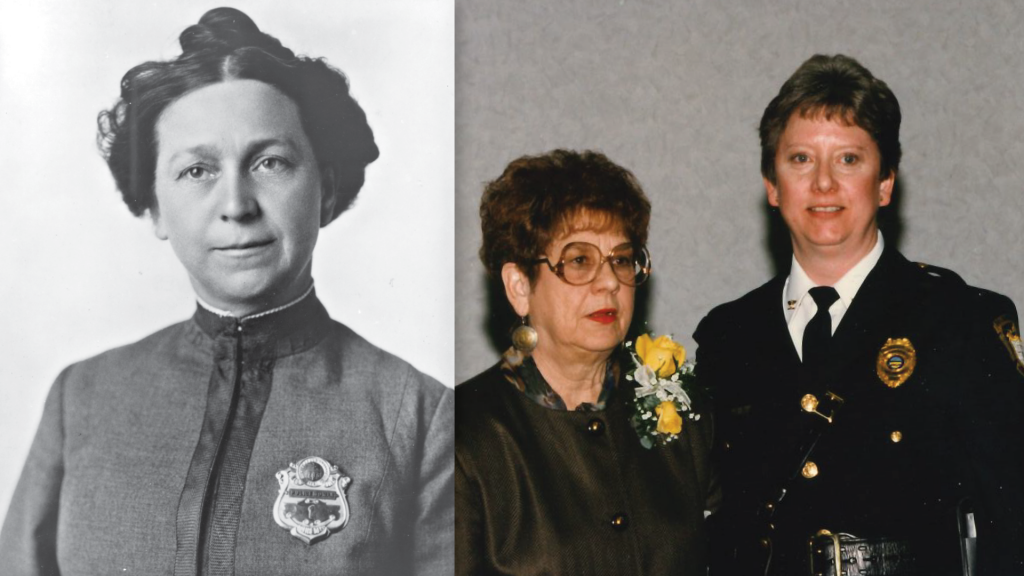 Just a few months before 100,000 demonstrators gathered on the Washington Mall to support extending the Equal Rights Amendment, two women were sworn in as Delaware’s first female police officers. Kathy Lieske, the first to take her oath that spring day in 1978, would rise to become the city’s first female police chief.

“There were a lot of articles written in the Gazette back then that had the word ‘first’ in the headline: first female officer, first female captain,” said Kathy. “I didn’t care for the attention or the reason behind it.”

The history of female police officers began in the late 1800s, when New York City hired “police matrons” to guard female prisoners. The matrons were civilians with no policing powers. No woman was granted the power of arrest until 1910, when Alice Stebbins Wells, a 37-year-old minister, convinced the mayor of Los Angeles that women and children would be more comfortable with female officers.

Alice was given a badge and first aid kit, then assigned humdrum duties like guarding skating rinks and dance halls. She wore no uniform and carried
no weapon.

While her beat may have been banal, Alice, pictured at upper right, blazed a trail for future female officers by advocating for national inclusion and serving as the first president of what would become the International Association of Women Police. Alice’s torch was picked up by Chicago policewoman, Lois Lundell Higgins. Lois carried a gun, purchased with her own money, and investigated domestic violence cases. She eventually rose to head Chicago’s Crime Prevention Bureau in the 1950s and 1960s.

Those two decades saw many “first” appointments of female officers across the country. They were relegated to cases involving women and children, received a lower salary than men, and were not granted their own beats to patrol. It wasn’t until 1972, when Congress amended the Civil Rights Act of 1964 to require police departments to hire women on an equal basis as men, that the role of female officers began to balance that of their male counterparts.

“I knew by the age of 13 or 14 that I wanted to be an officer after watching “Adam 12” on TV,” Kathy said. Her parents were supportive but skeptical. Kathy’s mom suggested she pick a backup career, so she went to college for an education degree. Nearing graduation, and with only her student teaching left to complete, Kathy broke the news to her parents that she would never be a teacher.

“Well,” bemoaned her father. “That was a waste of tuition money.”

Kathy worked days and attended night classes at the University of Toledo until she graduated with a degree in law enforcement and public service. Eager to set foot on her career path, she wrote letters to northeast Ohio police departments. The Freemont, Ohio police chief wrote her back, saying that police work was too dangerous for a woman. Even the dispatcher position would be “impossible” due to the proximity of prisoners being brought into the police department. Kathy still has that letter.

In the summer of ’74, she approached the sheriff of Ashland County and asked if he would hire her. To her amazement, he agreed. The sheriff’s wife worked in the agency’s civil division and became a mentor to Kathy. Eventually, Kathy worked as a dispatcher and then started to go out on patrol. She gained her certification in law enforcement and received training in hand-to-hand combat. “I remember the training officer telling the deputies that he would teach us just enough to get ourselves killed.”

Finding her annual salary of $5,200 lacking, Kathy ventured away from the sheriff’s office. What she found outside of Ashland was fierce competition. Two years and seven civil service tests later, Kathy, pictured at lower left, joined a police force. She had finished second in Delaware’s civil service exam during a year when the agency was hiring five new officers. Delaware would be her last stop.

Her boss, the late Police Chief Dick Browning, was a forward thinker who raised standards and modernized the police department. Under his command, she always had equal training and duties. He was rewarded with an officer who embraced the dirty work, was the first to back up fellow officers, and always wanted to be judged by the job she did. There was one group, however, who had to be convinced. Chief Browning dispatched his own wife to have a chat with the officers’ wives. Mrs. Browning assured the wives that Kathy could protect their husbands just like a male officer, and that she wouldn’t have designs on any of the men after spending eight hours a day together in a cruiser.

Her first 11 years in Delaware were spent out on patrol, where speeders often did a double take while she wrote their tickets. As to how she was treated, “No one likes getting a speeding ticket, whether it’s from a male or female officer.” When she was promoted to sergeant, Kathy’s father recovered his disappointment and bragged about “my daughter, the sergeant.” The promotions kept coming until Kathy worked her way to the department’s top job.

Today, less than 13% of law enforcement officers are female. Why so few?

“The job is not for the faint-hearted,” Kathy said. “But success is determined by the person’s aptitude and attitude, not by his or her size.”

Though her career choice was inspired by a fictional police drama, Kathy says that police work is not about the action. “It’s a service-oriented job, not about having a gun on your hip. That’s been my attitude for 25 years of service.”

That spirit of service continued into retirement. Between travels, where she delights in having her picture taken alongside active-duty police officers from foreign countries, Kathy devotes her time to SourcePoint’s medical transportation program. In the last five years, she has driven over 2,220 miles delivering homebound seniors to medical appointments. “My career was always in service to the community. This is a natural progression from my career. Plus, I like to drive.”

Her favorite assignments are the repeats—she takes the same client to dialysis every Friday, others to rehabilitation. During the program’s pandemic-related closure she missed having her transports. When the program reopened, Kathy “jumped in headfirst.”

Early in her career, Kathy sat down at her typewriter to draft her personal mantra. The statement, on a yellowed sheet of paper, reads: “I sincerely feel I owe a responsibility to my God, my country, and especially to utilize my life to the best of my ability and contribute anything I can to make my life worthwhile.”

Kathy Lieske blazed a trail for female inclusion, but her motivation, then and now, was service to her community.