Seeking to Bridge the Generation Gap 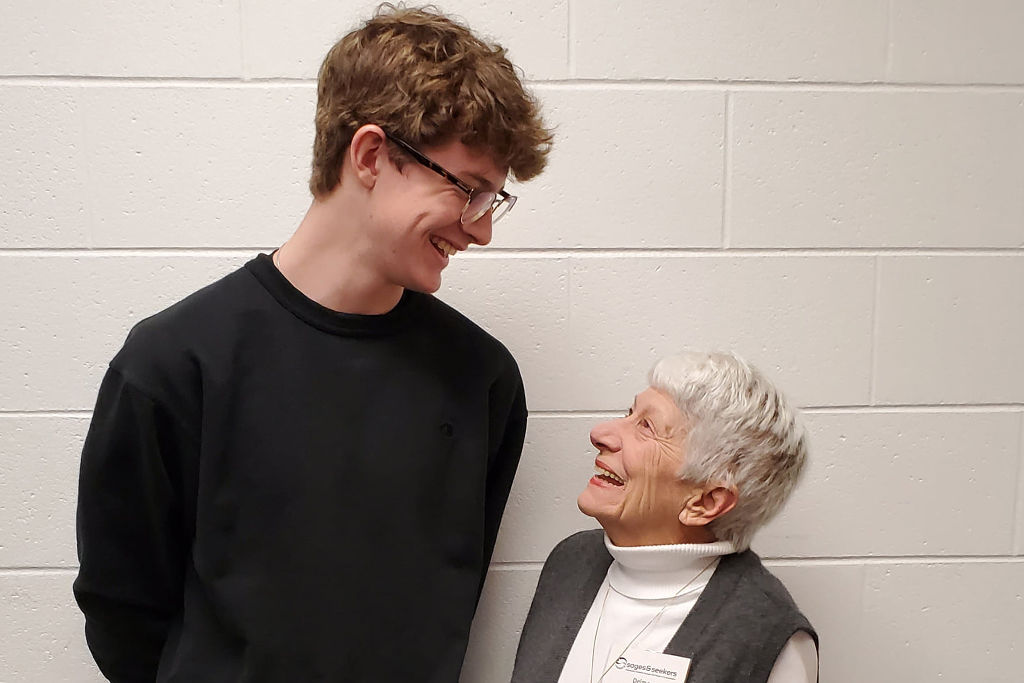 Kristen Beal thought she knew what to expect.

The former substitute teacher—who also worked in higher education during her career—had heard about a program that brought older adults and teenagers together to bridge the gap between generations and was interested in participating.

“I became interested because of the crucial age of the students, and I thought they were going to learn a whole bunch from me,” Beal said. “But they turned it around and I learned so much from them. It was such a gratifying experience.”

The experience Beal describes is the Sages & Seekers program, run through HelpLine’s Connections Volunteer Center and a component of the Age-Friendly Delaware County initiative led by SourcePoint. Jackie Haight, SourcePoint’s age-friendly coordinator, describes Sages & Seekers as an intergenerational program that combats social isolation and dissolves age-related segregation in the community.

“It meets the universal and compelling needs of both young and older adults to make sense of their lives through the simple art of conversation,” Haight said. “Older adults in the community have been connected with students from the Delaware City and Big Walnut school districts so far through the program.”

Sages & Seekers creates an environment conducive to sharing stories, bridging the generation gap while honoring and empowering older adults. Haight said dissolving age-related segregation while learning from older adults can help young people become stronger leaders in the future, and it helps the older adults stay active while serving as mentors, leaders, role models, and advisors for the younger generation.

For each week of the free eight-week program, older adults and students are brought together to share conversation in an effort to cultivate listening and communication skills, break down generational barriers, and foster empathy among participants. The first week brings the full group together, and Elaine Miller, community engagement coordinator at Connections, refers to the second week as “speed dating.”

“Students move from sage to sage and they select their top three,” said Miller, who said students have been paired with either their first or second choice thus far. “The next four weeks is one-on-one and the 7th week is students reading their essays in the form of a letter talking about what they learned.”

While Sages & Seekers was designed to be an in-person program, organizers and participants were able to adapt to a virtual format during the pandemic.

“We did in-person sessions in the fall of 2019 and winter of 2020. One session was canceled and then we went virtual,” Miller said. “When conducting the research for this program, it was discovered that older adults and teens report the highest rates of loneliness. So being able to do this during COVID with these two generations has been really important.”

Pam Spence got involved as a “sage” after hearing about the program at a banquet.

“I thought, ‘What a great idea,’ and I thought the students were going to interview us, but it really wasn’t that, and it really wasn’t mentoring,” Spence said. “It was a conversation; they ask us questions and we ask them questions.”

Spence said the fact that the “sage” and “seeker” begin the program as strangers allows the conversation to be more open.

“Say you’re traveling on a train across France and you strike up a conversation with an interesting stranger, and suddenly you’re much more candid,” Spence said. “That, to me, is the most intriguing, wonderful, and exciting thing about this, along with the fact that you’re usually talking with a high school junior or senior at a time in their life when they are looking out the door and wondering what is out there.”

Beal said she became interested in the program through Miller and has found it to be a gratifying experience.

“They do generate questions before our first meeting, asking ‘Where are you from’ and things like that, but it was so different,” Beal said. “We talk about music and they might say ‘My parents listened to that.’ The kids were very savvy and I was surprised at their thinking about things. They were inquisitive and asked good questions.”

For the sages, participating in the program may mean returning to their own not-always-positive teen years. Spence said her participation brought many of those times back, but also created an opportunity.

“I took part in the first session and initially wasn’t sure about it,” she said. “At the same time, the decision to go on with it and come back to it again was realizing my own time in high school when I felt totally alienated. What motivated me was thinking, ‘Who would I have wanted to meet and talk to during those lonely and desperate times in high school?’

I would have wanted to meet someone like me, who can say, ‘Everything can go to hell and you can still make it!’”

Spence said her first Sages & Seekers session paired her with a student who’d had a difficult childhood but who had developed an impressive plan for her future.

“There’s nothing like a teenager asking you if you are happy with the choice you made in your life or about the worst thing that happened to you,” Spence said. “But you can be forthright and understand and share that those bad moments were instructional. I didn’t get my master’s degree until I was in my 50s, and after our session, she looked at me and said, ‘You never gave up.’”

“One thing that is so important is these adults come into these students’ lives and are impartial; they can focus on them as a human being,” Miller said. “Often, that is the first time for students to interact with an adult in that capacity, and I think that is really what brings out so much conversation.”

In many cases, the relationship between the sage and seeker continues after the program concludes, though Miller said it is mentioned to all participants that staying in touch is not a requirement.

“I would say a good majority keep in touch for at least a few months, and others more regularly,” she said.

Haight said she has attended the final program where the seekers read their letters and gets emotional every time.

“It’s such an inspiring thing; they talk about how we clearly have differences and are at different places in our lives, but they found so many things we have in common,” Haight said. “The thing I see is that it’s bridging that gap. This program takes away that stigma and the societal differences. It honors and empowers older adults while the youth learn valuable life skills through communication and connection.

“I think it promotes a greater understanding and respect between the generations, and I hope the students take that to heart and remember how positive an experience it was and how they will engage with older adults going forward in their lives,” she added.

Jeff Robinson is the feature writer for My Communicator.